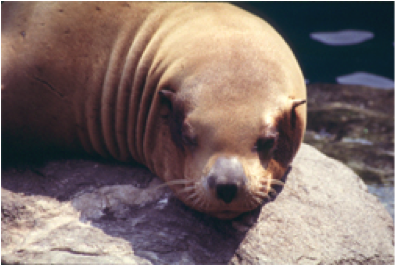 What are we studying?

We study Steller sea lions (Eumetopias jubatus) in the ‘One’ environmental health approach to gain an overview of global health investigating the health of humans, wildlife, and ecosystem health. Steller sea lions are endangered and can provide insight into global health as a wildlife species. They are a large, and long-lived species that spends much of their life in the ocean where they may be exposed to environmental contaminants. We study Steller sea lions as models to understand the threat of metal pollution to them, to monitor the health of the oceans, and to understand human health. To accomplish this we employed several methods: 1) We collect sea lion tissue samples to measure metal levels including chromium. 2) We establish primary cell lines to measure chromium induced cell death and genetic changes and compare those outcomes to the same endpoints in human and other wildlife species cell lines.

Why are we studying it?

The western population of the Alaskan Steller sea lion is and continuing to decline for unknown reasons. One potential explanation for the sea lion’s decline is environmental contamination. Steller sea lions are exposed to a variety of contaminants, including metals, through their environment and diet. However, studies clearly show that Steller sea lions are exposed to metals, they don’t document the extent of exposure or bioaccumulation. This limitation is because those studies were limited either by the number of metals considered or the number of organs considered. We are focusing on metals, measuring their accumulation in the tissues of the sea lions, establishing cell lines from the major organ systems and determining the effects of metals in these lines, so that a priority list can be developed for intervention measures. We aim to identify the risk of environmental contaminant to the sea lion populations and determine if sea lions can serve as indicators of the threat of environmental contaminants to human health.

What are we finding?

We presented baseline data of metal concentrations in pups as a first step towards investigating the potential threat of developmental exposures to contaminants (Holmes, et al., 2008). Seven metals were investigated: arsenic, cadmium, silver, aluminum, mercury, lead and vanadium. Vanadium was detected in only a single blubber sample. Mercury appears to be the most toxicologically significant metal with concentrations in the liver well above the current action level for mercury in fish. The concentrations of aluminum, arsenic, silver, cadmium and lead were present in one-fourth to two-thirds of all samples and were at either comparable or below concentrations previously reported. Neither gender nor region had a significant effect on metal burdens. Our future work includes considering metal concentrations in juveniles and adults and performing toxicological studies in order to begin to assess the toxicity of these metals.

We are investigating the hypothesis that metals might be a factor in Western Steller sea lion population decline. We found that a soluble chromium compound induced a concentration-dependent cytotoxicity in an organ-specific manner in Steller sea lion cells (Wise, J.P. et al., 2006). Testicular cells were the most sensitive, and skin cells the most resistant. Lung cells were of intermediate sensitivity (shown in figure below). 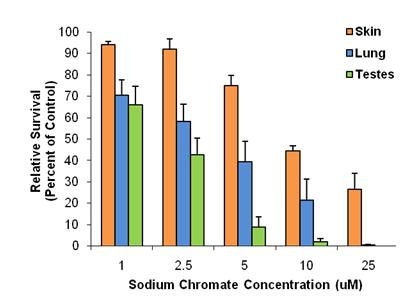 Chromium uptake, measured by ICP-AES, increased with concentration in a cell-specific manner. When exposed to the same concentrations of sodium chromate, testicular cells accumulated greater intracellular concentrations of chromium ions than skin or lung cells did (shown in figure below). This difference in chromium ion uptake may account for part of the differences in cytotoxicity among cell types. Tissue samples obtained opportunistically from pups were analyzed using inductively coupled plasma mass spectrometry (Holmes et al., 2008). Most pups had undetectable levels of chromium; however, in those where chromium was detected, its concentration was similar to that causing 50% cytotoxicity in culture. This finding suggests chromium may be a significant risk factor for Steller sea lions. These data were determined from a small number of samples from pre-weaned pups, and thus may not reflect adult exposure levels. However, given that chromium is known to accumulate and persist in human tissues, it is likely that adult exposures will prove to be much higher than pup levels. 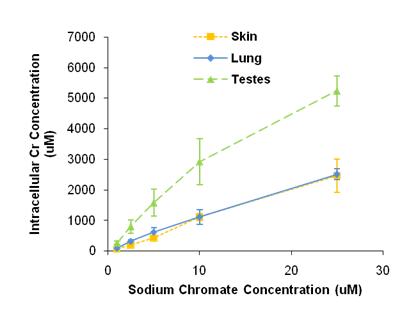 We recently reported data that Western Steller sea lions are exposed to chromium (Wise et al., 2006). The tissue levels were not particularly high because the study focused on sea lion pups, but the data do indicate that exposure to Cr occurs in the population and levels in the adults are expected to be much higher as metals are known to accumulate with age in this species. However, the ability of Cr(VI) to induce genotoxicity in this species or the class of marine mammals it represents (Pinnipedia) is unknown. Therefore we have investigated the genotoxicity of both particulate and soluble Cr(VI) in cultured Steller sea lion lung cells (Wise, S. et al., 2009).

Soluble hexavalent sodium chromium damaged chromosomes at 0, 1, 2.5, 5 and 10 uM concentration in 6, 11, 21, 36, and 39% of metaphases and damaged 6, 12, 27, 49 and 57 total aberrations in 100 metaphases, respectively. We also considered the toxicity of particulate hexavalent chromium, as it is the more potent carcinogen in humans. We also found that 0.1, 0.5, 1, 5 and 10 ug/cm2 particulate chromate was genotoxic and damaged chromosomes in 9, 13, 18, and 23% of metaphases and induced 9, 15, 20 and 30 total aberrations per 100 metaphases, respectively. These data indicate that if sufficiently exposed, chromium may adversely affect the struggling Steller sea lion population. It would be prudent to investigate the effects chromium has in other Steller sea lion organs in order to derive a better understanding of how chromium in the marine environment may be affecting the declining Steller sea lion population.

These data indicate that both sodium chromate and lead chromate are less genotoxic to sea lion cells than human cells, based on administered dose. Of course it is possible that the mechanism for these differences is differential Cr uptake into the cells, since the data shows less uptake in sea lion cells. However, correcting for the greater chromium uptake in the human cells at these doses shows that, for sodium chromate the difference in Cr(VI) potency for genotoxicity is explained by differential uptake. However, for cytotoxicity, differential uptake contributed to the differences, but it cannot explain all of it and other mechanisms must be involved. By contrast, for lead chromate-induced cytotoxicity and genotoxicity, uptake does appear to account for the difference between the cell lines.

What does it mean?

Our data support the suggestion that chromium (VI) poses a potential health risk to sea lions who are exposed to it through either inhalation of chromium (VI) or other routes such as diet. Furthermore, because our data indicate that chromium damages chromosomes, chromium (VI) exposure may contribute to the development of cancer, developmental abnormalities and failure to reproduce.

Where can I read more?